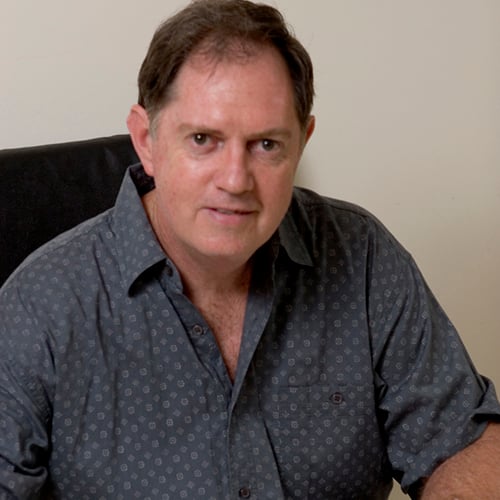 Gordon Hanley realised many years ago that watercolours could be used to create images like no other, and he began to rapidly explore the potential of this challenging medium. Entirely self-taught, Gordon can turn his hand to many things.

Born in England, Gordon travelled to Australia as a five-year-old. He paints from his studio in Brisbane, Queensland.  In a way, Gordon has had a series of art careers that have evolved over the decades.  It’s been a wild ride that has seen the profile and talent of Gordon Hanley rise and rise.

Morpeth Gallery first met Gordon when he was painting 1950s and 1960s nostalgic images of children in scenes familiar to that time – purchasing fish & chips from the corner shop, getting a bowl haircut from one of your siblings, playing nurses & doctors, hanging out with the local motor mechanic.

Many of these images were replicated onto collectable biscuit tins, tapestries, placemats & coasters. Gordon Hanley was on his way to becoming one of Australia’s greatest artists. Gordon’s first solo exhibition was a sell out at Morpeth Gallery in 1990.

Gordon’s second art phase came about as a result of his Biological training and Gordon is also known for his Australian bird paintings, in watercolour, which led him from 2000-2004 to an ambitious project painting Parrots of the World and involved the creation of 244 watercolour paintings. During 2005, Gordon travelled to the UK to collect images for 72 paintings of birds of prey used in falconry. He then painted every model of Rolls Royce made since 1905. Gordon is also an official artist for the Magic Millions, a prestigious organisation, which sells racehorses.

It took Gordon two years to perfect the grounds – the creation & preparation of the paper, using the medieval recipes, then a further year to perfect the medium of drawing with precious metals –  pure silver, 24ct gold, 24ct gold leaf, white gold leaf, white gold, copper, platinum, palladium.  One slip of the stylus and the drawing was ruined.  Unlike watercolour or oils, a mistake could not be fixed.  Morpeth Gallery began selling Gordon’s metalpoint drawings in 2009.

Metalpoint drawings of wildlife, insects and portraits of people are created in a photorealist style.  Each drawing may take many months to complete. Each metalpoint, consists of hundreds of thousands of individual lines drawn with a wire of precious metal.  It makes each drawing the product of extreme patience, precision and time.

Metalpoint drawings created entirely in precious metals, have a much warmer tone than drawings in pencil and when tilted to the light, the warm grey drawings come alive, reflecting light in a shimmer of golden light. So intricate are Hanley’s drawings, people are hard pressed to differentiate them from black and white photographs.  Only if you examine a metalpoint with a magnifying glass, can you see each stroke of the stylus.

Hanley, whose works are sold exclusively by Morpeth Gallery, in Australia, has been awarded the status of Living Master by the prestigious US Art Renewal Centre (ARC).

The ARC defines a living master as “one who has the rare talent, experience and expertise to create great humanistic works of art that are seemingly executed with effortless perfection”.
The ARC is the largest organisation in the world promoting the cause of realist art at the highest level.

Their website generates 20 million hits a month, is influential across the art world and has become the “go-to” standard for galleries seeking the finest living artists in the world.  Gordon is the first Australian artist and the first metalpoint artist in the world to receive this accolade.

As a result of his ARC recognition, Hanley continues to be inundated with requests for interviews from international art publications including the American Artists’ Magazine, The International Artist Magazine and Australian Artist.  He was also invited to exhibit in an exhibition in Florence, Italy.

From 1992 Hanley has released over 100 different print titles in both open and limited edition format, making him one of the most published print artists in Australia.