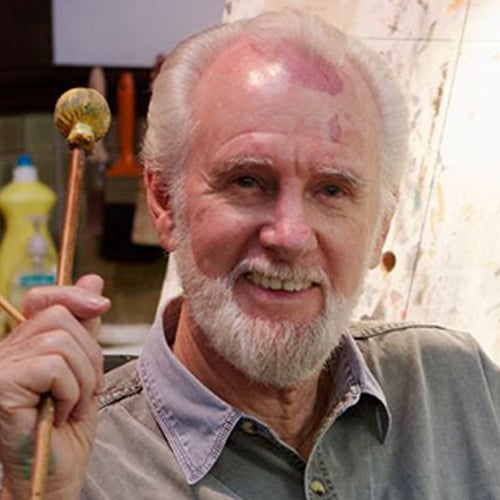 Bill held an exhibition at Morpeth Gallery in November 2003, a thank you to the people of the Hunter, as his birthplace was Newcastle. In the months leading up to this exhibition, collectors of Bill’s work would excitedly phone and email to gain sneak peeks of the artworks to be featured. Some new, some that had been tucked away in his studio, ranging in price from $1,500 to $24,000 sold out in 1hr and 10 minutes!

In 2013 his last exhibition was held at Morpeth Gallery, when 39 paintings sold in 11 minutes. A film crew documented it. It is available from Morpeth Gallery as a DVD titled Birdman – The Art of William T. Cooper.

Sir David Attenborough said he believed Bill Cooper to be “Australia’s greatest living scientific painter of birds, he is possibly the best in the world.” Sir David made a film about Bill in 1993 called, Portrait Painter to the Birds and it went to air around the world. In Australia it was released as a Video/DVD after its TV debut.

Bill’s bird paintings are scientifically exact. No wonder they end up in so many publications in collaboration with leading ornithologists such as Joseph M Forshaw.

Bill’s childhood was spent in the bush, he spent his teenage years as an apprentice to a taxidermist at Carey Bay Zoo and later he had a career as a window dresser before becoming a landscape artist, then wildlife artist.

Bill lived and painted from his studio in the tropical rainforest of North Queensland until his passing in 2015. His resume is the stuff of dreams. He has worked with Sir David Attenborough. The Australian National Library and Papua New Guinea Government have purchased entire collections of his work. He designed two sets of postage stamps for the PNG Government.

William T Coopers original artworks of beach scenes, eagles, cockatoos, riflebirds, cassowary and kangaroos have to be seen to be believed. They are simply awe-inspiring.  Most people who own a William T Cooper original wildlife or botanical artwork, which to hold onto it.  Occasionally they come onto the secondary market and are available for sale at Morpeth Gallery, along with William T Cooper’s DVD and two books.