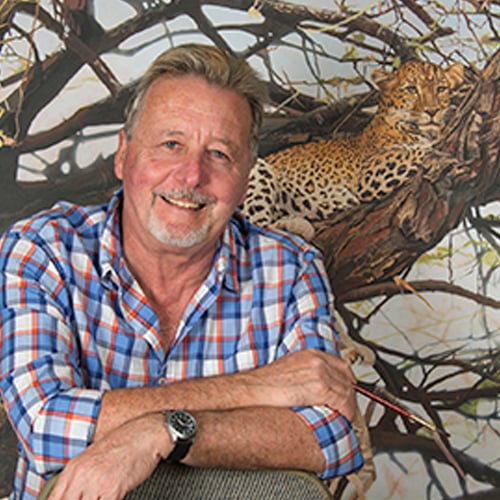 Stephen Jesic has been an artist from his youth, and it has been now more than thirty-five years since he was able to devote his life to full-time painting. During that time, he has exhibited extensively in Australia, and become celebrated not only for his extraordinary depictions of wildlife but for his phenomenal technique in bringing animals to life.

Stephen has lectured and written about his innovations in using the medium of acrylics to render the finest detail, while at the same time suggesting an atmospheric setting for his subjects. Like the great naturalist-artists of the past, Stephen studies his models intensely. He is a perfectionist to the extreme, which is why it may take Stephen up to twelve months to finish just one painting.

His paintings are as many individual portraits, as they are scientific representations of the species seen in their native habitats. Based on both first-hand study of individuals and research into the habits, ranges, and behaviour of the species, Stephen’s paintings portray not only how his subjects appear, but how they live. Stephen has an extensive collection of catalogued reference material he has collected over the years which he draws from to design his originals.

Before 2014, Stephen’s work was little known outside of Australia, a result of collector demand and Stephen’s limited output. This all changed in 2014, when he won his first international accolade. He was awarded the Grand Prize Winner in the International Artist Magazine Art Prize Challenge No. 83 Wildlife Category for his painting of a koala Tender Tips.

Stephen’s extraordinary depictions of Australian and exotic birds and wildlife including parrots and macaws has resulted in multiple international awards and numerous featured articles in international art publications including International Artist Magazine and American Art Collector.

In December 2019 to February 2020, Stephen’s international award-winning painting of a scarlet macaw in a rainforest, Morning Reflections was hung in the prestigious Museum European of Modern Art (M.E.A.M) in Barcelona, Spain as part of the Art Renewal Centre 14th Salon travelling exhibition.

His originals are available exclusively in Australia at Morpeth Gallery.