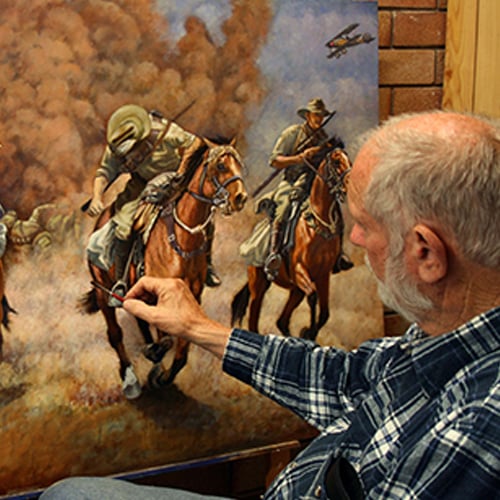 Ron Marshall uses what he calls the Mixed Technique, using acrylics, alkyds and oils to create amazing paintings of the Australian Light Horse.  To this day, he is still experimenting with paint in order to achieve the effects he wants.

Every scene that Ron paints is based on actual facts and he spends as much time on researching each image as he does painting it.  Every detail is accurate.  Horses, soldiers uniforms, field gear, terrain.  This is why Ron paints his works so large it is so he can achieve the detail as even working at this size he is using the finest brush he can.

Ron Marshall was born in 1938 and grew up in Sydney. Because of his artistic skills he began his sign writer apprenticeship at the age of 14 years and 10 months.

Ron was always experimenting to find new and better ways to achieve the results he sought, and some of his discoveries soon became normal practice in the trade. Ron was much respected in the sign trade for his high standard of workmanship and artistic skills.

It wasn’t long before Ron turned his attention to fine art. He associated or painted with such well-known traditional landscape artists as Doug Sealy, Les Graham and Robert Wilson.  He earned the nickname of “Rainmaker” because it always seemed to rain whenever he came with them on a camping trip on which they intended to paint on site.

Ron was fascinated by the techniques of the Old Masters, such as Rubens and Rembrandt, and studied their methods, used the same materials, and experimented with their techniques. During this stage he produced numerous copies of these masterpieces.

He continued in the trade for over 40 years until retiring for health reasons in 1995 when he moved to Mackay, Queensland and began thinking about doing some serious painting.

He met Jennifer Jowett in a local gallery, together they won the Mackay Airport Mural competition in 1996. They married and relocated to the southern Queensland in 2006.

The couple continually combine their interest in local Australian history, landscape and horses.  Their “Mount Britton Collection” a series of paintings recording the activities and lifestyle of the people associated with a pioneering gold town near Nebo. Prints of these paintings are on permanent display in the Nebo Museum’s Courthouse Gallery.

Ron has never kept record of his exhibitions or awards before his alliance with Jennifer, however he did have a sell-out exhibition of his landscapes at Kirribilli in the 1970’s, and has sold paintings to the Australian Prime Ministers Department.

Ron’s paintings are poignant images that represent the relationship that developed between many of the Australian Light Horsemen and their faithful horses. The respect, loyalty, and affection between many a trooper and his assigned horse became legendary. Man and horse became equally reliant on each other for their well-being and survival.

These strong and hardy horses known as Walers had been bred in Australia, and like the men that rode them, they had developed the strong constitution that served them so well in the desert regions of Egypt, Sinai, Palestine and Syria during World War I. They also developed a reputation for their willingness and heart – the will to keep going and not give up when conditions became extremely difficult, and even terrifyingly dangerous.

Water was a rare and precious commodity in the desert, and each man’s rations were carried in his one quart water bottle. In the searing temperatures and baking sun of the desert, it was inadequate supply indeed. A patrol into the desert required the trooper to take all his food and water supply with him, however he could only take meagre food rations, but no water for his horse. A horse could go 2-3 days before requiring water, but without adequate quantities of that water, both man and horse would die of dehydration and heat exhaustion out in the desert.

Many a Light horseman would on occasion share his scant water supply with his horse – it could only be a token amount at best, a symbol of his compassion for his horse; for the horse would have required a great deal more and the trooper needed every precious drop for himself. Prolonged insufficient water under these conditions was the cause of kidney failure in many a man and horse.