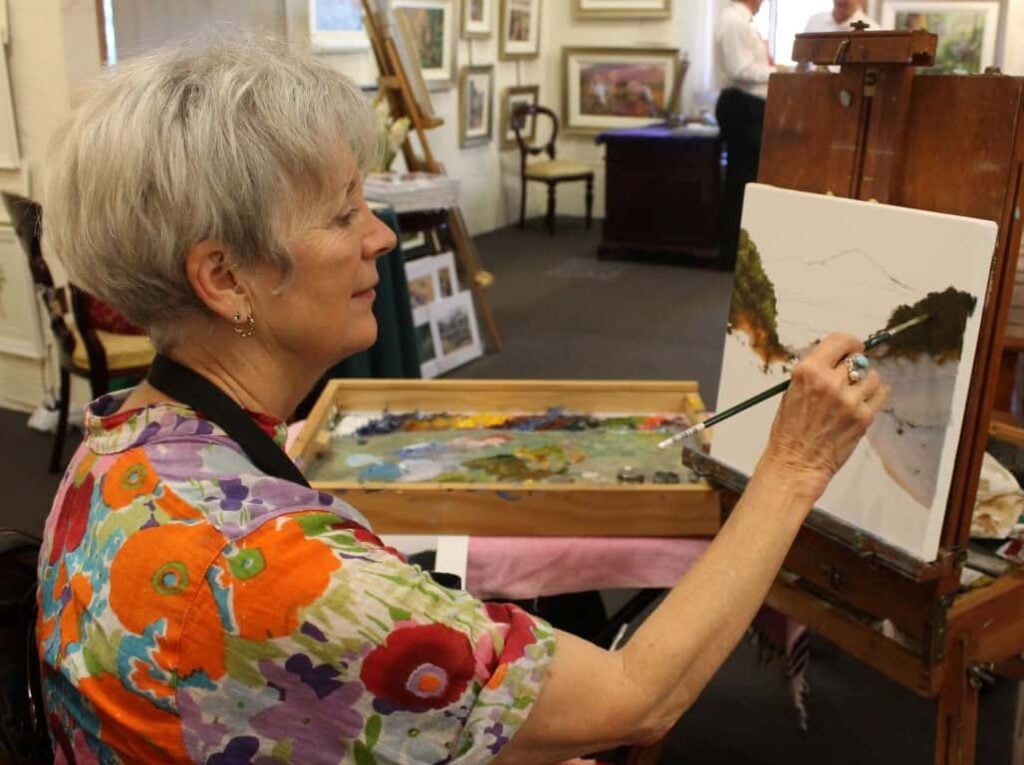 Oil on Canvas board and stretched canvas

Robyn is well known as a prominent Australian wilderness landscape and seascape painter of contemporary realism who started painting in the early 1970’s, when traditional art was really taking off and Sydney Galleries were frequent and successful.

Most of what she has learned, has been from the observation of nature and constant hard work, being a self-realised artist. Having spent many years painting en plein-air Robyn then graduated to studio work and subjects requiring more time and reference while still retaining the Alla-Prima technique. (Direct painting, wet-in-wet).

Robyn has bush walked extensively over her 40 year career as a visual artist and still walks several times a week. Her real love is travelling to remote areas – wilderness subjects and areas of difficult access being her special niche.

Studio work by definition, can be very limiting in its inspiration, if time is not taken to absorb the energy of the natural world. Love of walking takes her to some very special and isolated places, most too long in distance to carry heavy painting gear.  Robyn enjoying the interpretation of special moments that only a camera can capture. The interplay of light and shadow or the unravelling of a complex pattern on water, the fleeting moment of a cliff turning purple in the late light, are all the type of moments difficult to capture convincingly without a camera at the ready.

It is the human element of re-composing the subject and the interpretation of the image in a new way that creates a painting over a photograph. As an artist, Robyn is invigorated by the challenge of the painting of more difficult and intimate subjects. However, always mindful that it is a painting that she is creating, she rarely relies on one photograph alone which is the aid not the end result.

For the past eleven years, Robyn has been travelling around Australia and New Zealand conducting workshops. This direction is proving to be most fulfilling. Painting will always be her first love, but Robyn feels enriched by being able to impart knowledge to others who are also enjoying the journey of art, something that has formed and enhanced her life beyond belief.

While photographs and digital prints adorn many modern-day walls, nothing, Robyn feels, can take the place of an artists’ skill and interpretation in paint. It is this element that makes original art so special. Surely it is only this human creative element that can give rise to the feeling of awe and the comment “How did they do that….?” And it is so true that art can change the way we feel.