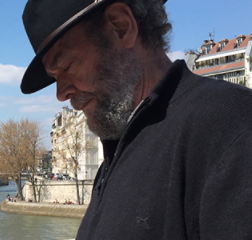 No other Australian painter presents the harsh Australian bush or cold city streets with such softness and subtlety. The hand of this former crocodile hunter is not anywhere evident in the calm, gentle landscapes that have made Ramon Ward-Thompson one of Australia’s most sought after artists. Ramon has been painting professionally for 50+ years.

Ramon is able to capture a soft mood, no matter what the subject – it could be the urban jungle of New York and still feel romantic and intimate. He prefers to paint in the early morning and late afternoon, when distant objects tend to fade into a soft haze. Ramon uses only three primary colours and white paints, and he mixes these over and over to obtain the colours he desires.

Born at Masterton in New Zealand, Ramon purchased a one-way ticket to Sydney at age 19. From jobs digging sewerage and rigging, Ramon saved up enough money to travel to England, where his mother, a music teacher & noted violinist, was now living. He took up painting and spent 12 months attending Art School in London, before travelling back to Sydney.

He and a New Zealand mate set off to Darwin, where he hunted crocs by night and fished barramundi by day. They became experts in their field, making documentaries for TV and being interview by journalists. Ramon was self-employed and vowed never to work for wages again.

In 1970, after three years, Ramon parted company with his mate, and moved back to Sydney with his possessions rolled in a blanket and $1,000 in the bank. He threw himself back into his painting, with a sell-out exhibition in a friend’s hair dressing salon in 1971. He married wife Wendy in 1972, who now works full time as Ramon’s manager.

The couple settled in Berrima, Southern Highlands, NSW – a move that was to greatly influence his painting style, as it is here that he introduced the soft misty Highland light into his romantic studies of life in the Australian bush – a feature that he has developed and explored over the years.  It has become Ramon’s signature today.

In 1994 Ramon hosted an exhibition of 86 paintings in a Sydney gallery, where a Limited Edition book on his life was also released. Every solo exhibition Ramon has held at Morpeth Gallery has been a sell-out. Over the decades Ramon’s artworks have been featured on collectable biscuit tins, calendars, prints, greeting cards, glasses cases, coin purses and computer mouse pads.

Ramon paints from his studio when he is not travelling the world.  Artworks featuring the great cities Europe: Paris, Venice, New York, London, are some of his most popular subjects.  Equally Ramon’s portrayal of Sydney Harbour and the surrounding city area come to life.  Outdoor cafes, flower markets, old terrace houses are portrayed with a soft study in light that has always been uniquely Ramon’s alone.