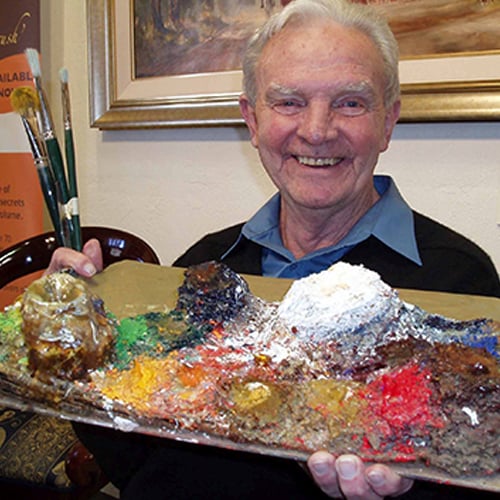 Oil on Board and Stretched Canvas

Letting the light play its impact on the natural setting was Kevin’s forte. Australian outback musters with the heat, dust and flies are all part of it. Most importantly in all his work he captured with great detail the light.

Kevin said, “One of the best parts of being a landscape artist is the challenge of light. Not only light across gum trees, I grapple with light across the whole landscape.” It is the sunlight, filtered by thousands of trembling leaves that Kevin captured so well.

Kevin had great knowledge of his subjects, having travelled widely including much time spent in Australia’s high country. Here he has watched and sketched the brumbies, the annual muster, the cool running mountain streams.

“Have you ever seen the bush after the rain? That special aroma of wet earth, native shrubs and damp bark, when the colours of the eucalypt trunks seem to fairly glow?” To Kevin this was magical stuff.

Born in Hamilton, Newcastle, NSW in 1932, Kevin as a child loved to draw. Kevin often casted his mind back to a favourite bush setting to draw inspiration. His artworks can still be found today as prints, biscuit tins and placemats. Two books written and illustrated by Kevin and launched at Morpeth Gallery, with solo exhibitions, contain Kevin’s life history, memoirs, poems, sketches, paintings, and is a guide to how he painted.

His books are a legacy to future landscape artists, and fulfilled a lifelong dream for Kevin. Kevin was self-taught, although he felt the greatest teacher of art is nature. He was a unique individual and his paintings reflect that man.

Look for Kevin’s beloved border collie dog “Kelly” in most of his paintings.

Kevin Best OAM, died in Sydney on August 2012, aged 80. He leaves behind a wonderful legacy of his fabulous art which is recognized in dozens of countries worldwide and continues to sell on the secondary market in auctions, antique shops & galleries including Morpeth Gallery.