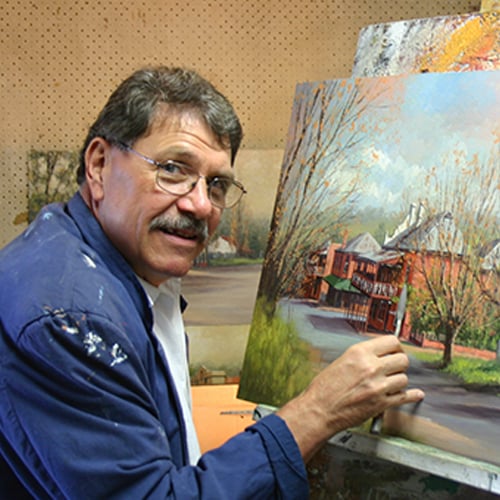 John was born in Belgium in the coal mining town of Marcinelle (known as the Black Country) in 1945.  He migrated to Australia in 1969, ‘to have a look’, fell in love with the place and it’s people and decades later, has not lost his love and passion for his adopted country, Australia.

Although since childhood, art painting was going to be his calling… it was only after schooling, a stint as Commander in the French Foreign Legion, becoming a crop dusting pilot and a career in finance with Inter Active Corp. In 1976, he became a full time professional artist with the support of his wife Francis.

As an artist not born in Australia, John feels he saw and still sees the Australian environment with fresh eyes.  The charm of nostalgic 19th century settings of historic towns has won John many accolades.  John’s work is reproduced as greeting cards, prints, calendars and books.  His paintings were among the first to be published by Art Nouveau during it’s domination of fine art publishing in the late 1980’s.

One of John’s prints was second on the national list of all time best sellers.  This achievement has helped grow John’s reputation as one of Australia’s well sought after artists.

When John paints a town, it’s as if he is a portrait painter.  He accurately sketches every building in the street before he starts his final work.  John says, “When I look down from the top of a hill in a village, I know every house in the town.  Sometimes I remove the bitumen or take a little liberty with the time of day or season, but the structure of the scenes is always true to life.”

John’s work hangs in private corporate and public collections throughout the world.  His polo scenes have proved popular with members of the Royal family, including Prince Charles. Kerry Packer was another collector of John’s work.

John paints seascapes, landscapes, polo games, street and beach scenes.  He immortalises the pioneer spirit of Australia with street scenes and country homesteads & windmills.  This has won him wide acclaim.

After several trips overseas, John has rediscovered the “Old Europe”.  Charming scenes of Provence in France, Ireland, England and Italy are popular choices for customers at Morpeth Gallery.  John has also recently created a series of mini paintings that sit on a small easel.  They make the perfect gift for family and friends or those that live in small spaces.  Sit one or two on a mantle, wall shelf, office desk or dressing room table.  As John says… The journey continues.”

Writes John, “Not long after my arrival from Belgium in 1969, I discovered and fell in love with the Hunter Valley.  Wife Frances and I spent many weekends visiting, looking for subject matter and that attraction never diminished, maybe the wine had something to do with it.

Our daughter Katrine and her husband Cory chose the Hunter Valley to celebrate their wedding in November 2006, since then I have been revisiting the Hunter Region which continues to inspire me.

Now decades after that successful first one-man show, John regularly returns to the Hunter Valley.  The Hunter has certainly changed since those early days, when only a few small vineyards were operating and occasionally a winemaker would barter some wine for a painting of their property.

The early British colonial settlement of the Hunter Valley is fascinating, it offers everything from early agriculture, mining, timber logging, maritime trading along the river and of course the creation of a powerful wine industry.  All these activities have left their mark and one can find reminders of small harbour towns and villages.