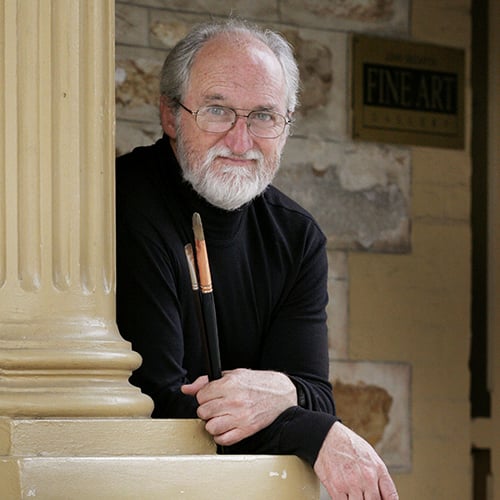 Commencing full time painting in 2002, John has been catapulted from relative obscurity to international acclaim as one of the world’s finest artists in a short space of time.  Based in the Adelaide Hills, South Australia, which is known as Hans Heysen country, John needs only to step out his back door to be inspired for his next major artwork.  The trees, the light & the livestock create a perfect scene.  It is paintings of trees & cattle, that John is most famous for.

Since 2011, he has received 102 international art awards and is now publicly acknowledged as a master artist by many of the world’s leading artists and galleries.  In 2014 John become an exhibiting member of the Art Guild Master Painters of the World.

John displayed a marked natural talent for drawing as a boy, but didn’t start painting as a hobby until age twenty. With no formal training he has continued to develop his craft through constant practice, analysing the work of the great many artists, past and present, who inspire him.  It was later in life that John made the daunting leap to give up a job with a steady income and become a professional artist.

John is an adept painter of landscapes, seascapes, floral/still life, human figure/portraits and animals and displays great versatility in being able to work effectively in most mediums to capture a diverse range of subjects.

Visually striking and convincing representations of the real thing, his works have great beauty and intense realism, designed to stir the heart and lift the soul. John uses colour and tone to create a powerful illusion of space, light and atmosphere. Light, particularly, is a notable feature of his work, prompting comments by viewers, artists and reputable judges.

These qualities combined with John’s keen powers of observation, superb drawing skill and passionate response to an inexhaustible array of subjects, sets him apart from most other artists. His works can be found in private and corporate collections worldwide.