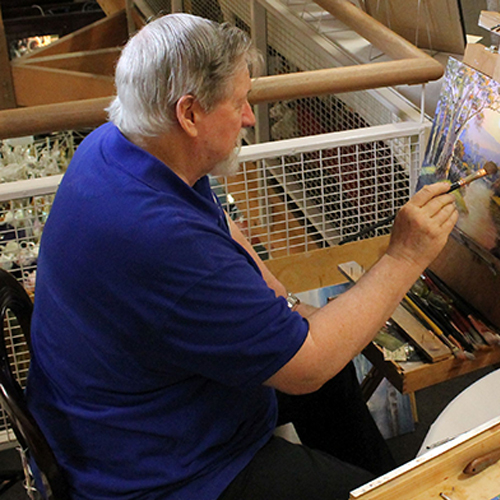 The first thing you notice about a John Bradley painting is the colour. You look at it and say, it is different than the eye normally sees it, but that’s not true. John says, “You’ve got to take time out and look at the Australian landscape because the colours are there. Look at that red there, look at that lovely green tree…” That’s what makes John’s paintings so different from most other landscape painters you may know. John’s treatment of light on trees and foliage is unique.

When you own a John Bradley painting you will notice how the light on the painting constantly changes throughout the day. Especially John’s Blue Mountain scenes, late afternoon as the room darkens you’d swear the mist was rolling out of the painting and into your lounge room – it’s amazing.

John is also extremely proficient at painting locomotives, aeroplanes, sailing ships, light houses and old historic buildings.  They are all reminders of times when the pace of life was a little slower and more meaningful.

John Bradley is an artist who has been successfully promoted. Two hardcover books have been published Blue Mountains Magic and A Journey Through Time. Companies such as Akubra and pharmacy chains have used John Bradley images on their calendars.

Born in Sydney in 1945, John’s early life was something of a Huckleberry Finn existence.  Surrounded by large tracts of land, parks and river, he was relatively free to roam during his schooling years, and explored the surrounding areas extensively, developing a love of nature in the process, and a familiarity with many of its aspects.

John’s early drawing skills were evident even at four years of age, when he would attempt to capture many of the scenes that he saw on holiday, and around where he lived, on large sheets of butcher’s paper.

By age eleven, he was entering and winning art competitions at the local theatres and schools, winning free movie tickets for himself and his friends. Many of John’s holidays were spent with friends and relatives in locations such as Glenn Innes, Kurrajong, Narrabri, opal mining at Lightning Ridge, gold fossicking at Bathurst or bushwalking the famous Blue Mountains.

All these activities provided a rich source of imagery and experiences which would lie dormant from an artistic point of view for many years.  Having completed his schooling, John went on to become an avionics engineer, soldier, aircraft inspector and electronic sales engineer, before moving into a management career in sales, marketing and advertising.

In 1981, John left corporate life, to take over a small art school in Sydney’s Western suburbs.  It grew rapidly with nearly 300 students.  In 1993 John stopped teaching to paint full time.

His artworks have been reproduced into prestige calendars for over twenty three years. John has had over 400 images in print throughout Australia and worldwide.