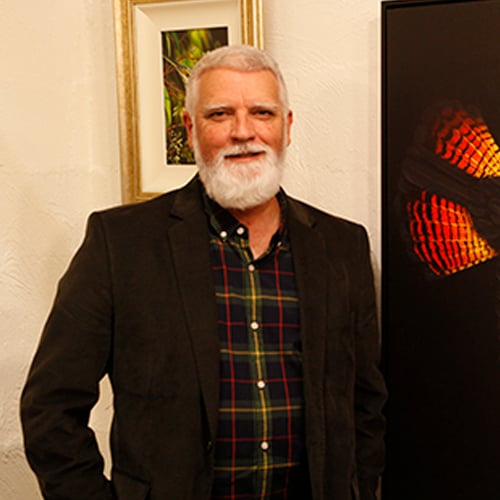 James Hough has combined a deep passion for wildlife and the environment with another of his life-long interests, Fine Arts. It was inevitable that these two passions would someday combine to produce a very rewarding career. James is known amongst friends as ‘Jim’

Bird life is of particular interest to James, and it has been a natural progression to combine his knowledge of birds and their environment with his art skills. His artworks extend to paintings of other Australian mammals and wildlife as well as International wildlife. James’ artwork reflects the deep respect he has for the natural environment and a desire to educate all to reverse its alarming destruction.

Born in the Australian coastal city of Newcastle, New South Wales, James grew up admiring native birds on the family property at Wingham on the banks of the Manning River.  He now lives near Maitland in the lower Hunter Valley of New South Wales with his wife. He continues to visit the family property that has given him so much inspiration.  James has never undertaken any formal art studies or training and takes pride in the fact that he is completely self-taught.

Each of his subjects is thoroughly researched, aided by all his own resource material from sketches to photography. The final composition may be components of many sketches and photographic images collected on walks and visits to many of Australia’s National Parks and bush land reserves.

A considerable amount of thought and research is combined to ensure that each work is as accurate and pleasing to the eye as it can be. Each new work is begun by collecting as much resource material from his own photographic records and sketches, confirming the particular bird’s habitat in various written publications.

James more often than not visits the bird’s habitat to get a feel for its environment and so incorporates some of the landscape of its surrounds in the final image. He returns to his studio with collections of objects found in nature, branches, lichens, leaves, blossom, and gum nuts.

”Everywhere I go I carry a camera, a tripod, and a notebook to capture some of those most unique moments in nature. Whilst painting each work my mind disappears into the deep gullies or rainforest canopies where I collected the resource material”.

The beginning of a new work is generally an idea or a recollection of a fleeting glimpse of a particular bird in the wild. ”To be able to capture this moment in the animals life and to share the image with others is very rewarding. I love being able to play with light, to highlight a subject’s gesture, or to recreate the atmosphere of the wild environment.

“I have been asked, why do you go to all the trouble to paint a bird like that when you could easily hang one of your photos?” My answer, “the original work of an artist depicts far more than a photo can ever portray. A part of the artist’s impression is captured in the subject, the mood, the light, a story, or the essence of a native bird, can all be manipulated to satisfy the artists will”.

James is a dedicated supporter of the (Tasmanian) Devil Ark & Aussie Ark projects, based on the NSW Central Coast and Barrington Tops National Park, Hunter Region.  Established in 2011, their mission is to protect Australia’s threatened species by creating sanctuaries and rewilding.  Tasmanian devils often feature on the gallery walls.

James’ artworks are on display at Morpeth Gallery.  His work has been published in a number of magazine articles, The Australian Artist, Hunter Lifestyle, International Artist Magazine and Australian Birdkeeper. His work is also well represented in many private collections in Australia and around the world.

During 2015 and 2016, James had two of his works selected for the prestigious Artists for Conservation exhibition in Vancouver Canada alongside many of the world’s top Wildlife Artists. Both years his artworks were selected to appear in The AFC book and calendar.

In 2017, James took out 3rd place in the International Artist Magazine’s Wildlife Art Prize for his stunning painting ‘Fruitful Ground’ which was sold at Morpeth Gallery.

The international awards continued for James in 2018 with the Artists for Conservation in Vancouver, Canada selecting James two entries as winners. “Sanctuary” (Green Rosellas) won best in show and a Medal of Excellence and was featured in the 2018 International Wildlife Calendar and his second entry “Times Like This” (Laughing Kookaburra) also won a Medal of Excellence and was featured as the front cover image of the AFC 2019 International Wildlife calendar.  James and his wife attended the presentation.

In 2021, Coles Supermarkets featured James Hough artworks of koalas and brush tailed rock wallabies on tissue boxes. Five cents from each box sold nationally has been donated to Aussie Ark for wildlife conservation.