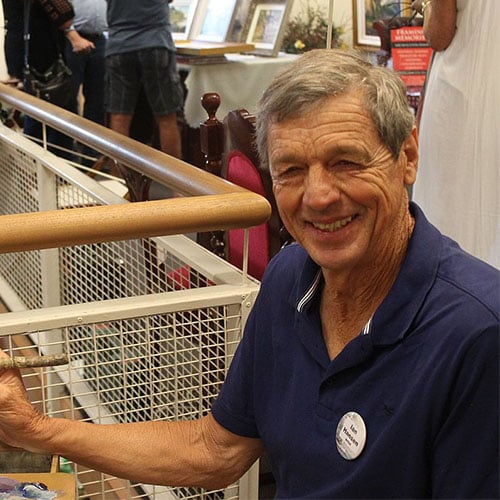 Fellow of the Royal Art Society

Oil on Board & Canvas

Born in Bordertown South Australia in 1948, Ian’s childhood years were spent on the foreshore of Hervey Bay. It was here that his deep love of ships and the sea developed. By the age of eight he was actively painting with water colours moving to oils when he was eleven. His first oil survived and hangs in his studio.

Marine artist Ian Hansen has a deep love of the sea and ships. He joined the Royal Australian Navy at fifteen and served for twelve years, including service on HMAS Sydney in 1967-68 during the Vietnam War.

When he joined the Royal Australian Navy he commenced as an apprentice shipwright, reaching the rank of Chief Petty Officer. Ian saw active service in Vietnam 1967-68. Ian painted continually in off duty hours, recording the ships and scenes he observed during his travels.

Proud’s Art Gallery offered him his first one man exhibition in 1974 while he was still in the Navy, the success of this show convinced him to try becoming a full time artist once his service time expired in 1975.

When he left the Navy, Ian became a successful full time painter and has since had exhibitions in the US, UK and Australia.  After a brief stint of cruising and painting on board a 38 ft yacht, he built a studio overlooking the Whitsunday Islands, this idealistic location was too far from the art world and he returned to Sydney in 1981. Married with three children, Ian lives in Hunters Hill, Sydney, his studio the converted stables in the rear garden.

In 2000 Ian was invited by the Royal Australian Navy to go to East Timor and record the Navy’s involvement during the crisis, he spent time on several ships sketching and painting, the resulting paintings now hang in the Navy’s Fleet Headquarters.

Ian exhibits with the Mystic Seaport Museum in Connecticut USA, the Kendall Gallery on the Isle of Wight, and Morpeth Gallery, Hunter Valley, NSW. In January 2002, he was appointed one of Mystic Museum’s “premier artists” – an appointment only given to twenty artists worldwide.

Recently Ian works mainly on commissioned artworks, such as the Postage stamp of HMVS Cerberus launched by Australia Post in March 2021 to commemorate 150th Anniversary of the vessel’s historic entry to service in Australia in 1871.

Question: Why is there a small F in the lower left hand side of his paintings?

Answer:  His nick name in the Navy was Fritz and his first paintings were sold to the captain of his ship who later asked him to continue to put the F for Fritz into his paintings, so he knew it was him.

He joined Don and Margie McIntyre on a trip to Antarctica in 2002 aboard the Sir Hubert Wilkins on a five week voyage, during which Ian sketched and painted the magnificent scenes of the great southern continent. The Ice Ship ‘Sir Hubert Wilkins’ was the perfect vessel for Ian to spend the five weeks voyage to Antarctica using the time to sketch, draw and paint in water colours the scenes he saw, his illustrated log is kept for future reference.

For maritime art lovers, owning an Ian Hansen is a very sound investment.