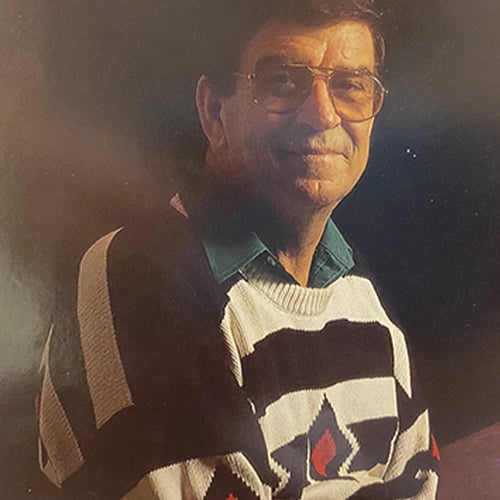 His paintings of Australia’s ‘golden age’ evoke nostalgic memories in many of us. d’Arcy’s art accurately depicts a child-like innocence of the late 1930’s and a more leisurely, less complex era of earlier times, now a part of our national history.

It is estimated that one in four Australian households have an image of Doyle’s in their home, whether that be a print, placemats, biscuit tin, calendar, mug, tapestry. It’s an amazing statistic.

d’Acry Doyle was born in 1932 and died in 2001. He began by painting murals, was a fantastic sign writer, joined the navy for a time and established himself as a successful realist painter.

His nostalgic scenes, painted from memory, made him a household name in the 1980’s up until his death in 2001. Children playing marbles, flying kites, soccer and cricket scenes.

Rural scenes of mustering sheep and cattle, droving and dairy farms were depicted on canvas, along with Australian poems and songs – Man From Snowy River, Click Go the Shears, Clancy of the Overflow, Waltzing Matilda.

Each was individually numbered in the left hand corner and signed in pencil by d’Arcy in the right hand corner. Prices of these prints on the secondary market during the late 1990’s and 2000’s rose as high as $7,000 each, such was the demand.

Like the stock market, with the introduction of new printing techniques from 2010 onwards, which allowed prints to be reproduced onto canvas with exact colour matching to the original artwork, these prints lost their dizzying market values.

Open edition prints were reproduced by publishing giant Art Nouveau Publishing in three different sizes, in their hundreds of thousands.  The three best-selling titles were The Big Ring, For Keeps & The Kite Flyers.

Doyle’s original authenticated artworks, remain sound investments to this day.  Doyle was not a prolific painter and there were never that many of his authenticated original artworks on the market.  As demand outstripped supply, it was the likely reason why, like all the great master painters of the world, his paintings were faked.

Doyle always began a master painting with a small study, then graduated to a middling size, before completing the 60cm x 90cm master artwork.  These were the ones used to create the prints.

Doyle’s depictions of some of our most famous cricketers remain popular. Doyle was also skilful at painting horses, a passion of his. He found it really easy, describing the process as simply combining a pineapple for the body, orange for the rump, banana for its back and a pear for its quarters. The rest was easy.

Since his death, Doyle original artworks have been in high demand. Morpeth Gallery has a steady flow of Doyle originals that sell through the Gallery, each one authenticated by gallery director Trevor, who has become adept at spotting a fake from an original.

Refer to How to Invest in Art on this website for more information on how to sport a fake Doyle from an original.