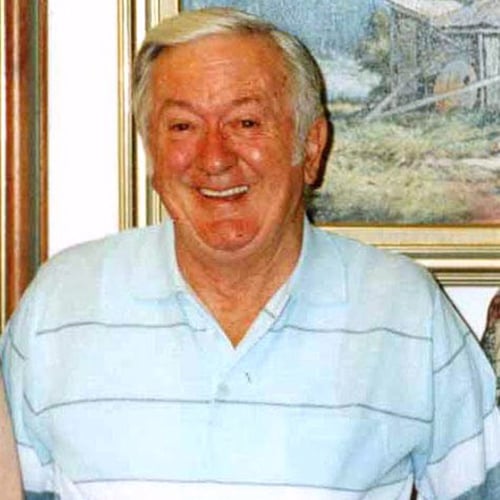 Bill Freeman was born on 16th June, 1929. He attended Minmi Public School, where, many years later, he would paint a mural of the town as it used to be.  His first job was working with his father as a timber-getter. Bill Freeman loved the bush, but his passion was to depict it with his brushes and paints.

Bills father wasn’t keen on his son pursuing art. So, Bill had a job at a clothing factory in Newcastle, working alongside his future wife. They married in 1950.  Bill Freeman was working all day, then painting late into the night, filling commissions as demand for his art grew.

When he was about 23, Bill and Dawn made a life-changing decision; she would work in a salaried job, and he would paint. He kept painting for the next 67 plus years.  Giving comment for a newspaper article wife dawn said, “He painted from when he got out of bed until he went to bed”.

Bill Freeman was largely self-taught but was given lessons and tips by one of Australia’s greatest painters, William Dobell, who lived at Wangi Wangi. “I took out some landscapes, and he [Dobell] said, ‘You’ve got potential, mate’, Mr Freeman recalled. He revealed it was “old Bill” who advised him to include what would become a hallmark of a Freeman painting –chooks, and always an odd number.

“He said, ‘If you make them even, the composition doesn’t look right’,” Mr Freeman said of Dobell’s advice. “He said nature was not even.”

Bill Freeman held a number of highly successful solo exhibitions at Morpeth Gallery and participated in its group shows. Bill Freeman was not only a popular artist but a beautiful human being. He’d mentor a lot of artists. He was very giving. He wasn’t secretive about his painting.  The Newcastle Herald obituary stated, “We’ve lost an absolute gentleman, and an icon of the Hunter.”

It was only fitting that in 1994 Bill Freeman won the “Dobell Art Prize”…the most respected art prize in the Hunter Valley.  That’s not surprising; he’s a great artist.  What surprised Morpeth Gallery director Trevor Richards was that he won with a painting that was hanging on the walls of Morpeth Gallery.

At the time Trevor said, “What this means is that your Bill Freeman painting could just as easily have been the painting that won the Dobell Art Prize.  To Bill every painting he did had to be the best.  Otherwise he would destroy it and start again.  That’s the sort of uncompromising person that he was.  That was the first time that he had entered any contest for many a year.

Bill only entered that art prize because a friend was running it and had asked Bill to enter as a special favour.  In the years that followed you would see Bill judging the art prize and many other art competitions throughout the district.  Bill was never an artist to chase accolades…but they have followed him nevertheless.

In fact, it was only at the insistence of others that he entered the prestigious Dobell competition.  Bill Freeman was a great friend of artist Sir William Dobell and he spent many hours with this Dobell.

You could sit and talk to Bill Freeman for hours as he recounts fascinating stories of his friendship with the other Bill (Dobell) and author Scott Bevan interviewed Bill Freeman on a number of occasions to gather information on Dobell for his book The Life of Sir William Dobell.

Bill Freeman was your average bush bloke, friendly, down‑to‑earth with an unassuming nature, one who never failed to be amazed at how his work was constantly in demand. His reputation as a realist artist went before him despite the fact he’d only ever held five exhibitions in his long, distinguished career.

He would say he only did what came naturally ‑ painting from the heart and soul, instinctively from life.  Yet the affable artist avoided any hint of pretension as he discussed his long career of some 67 plus years.

The demand for commissioned works continually grew and grew, even though he was supposedly ‘semi‑retired’.  Bill said: “I paint because I simply love it, not so much for the money. Over the years, I’ve sold works to State Premier’s wives, well‑known identities and have more paintings than I know hanging overseas, especially in Canada.

Once I had one fellow arrive in a cab from Sydney on the off‑chance I was home. He knocked on the door and asked if I had an available painting for sale. Lucky for him I did. He bought it and hopped back in the cab for the return trip”.

Bill was a traditionalist at heart and would recalled how a Sydney gallery once asked him if he could paint modern abstract works. “My answer was…of course I could,” said Bill. “I turned out three paintings within a couple of hours and they loved them. Then I shocked them by saying they were not for sale and I was throwing them right in the fire. To me they were not art in the real sense, and I never painted another.”

Bill Freeman was an artist who paints from the heart and captures images we know and recognise, which accounted for his popularity. There’s no need for interpretation: Australian landscapes, seascapes, mountains, trees, portraits of real people and especially historic buildings flowed across the canvas as he worked in his home studio overlooking the picturesque garden he and his wife Dawn had created around their Minmi home.

A rare collection of art came together again from all over Australia at Maitland Regional Gallery in September 2005, with a retrospective exhibition entitled The Spirit of Minmi. Exhibition organiser, Trevor Richards of Morpeth Gallery, at the time of the exhibition said: “Very few artists are given the opportunity to have an entire collection of their work shown at a regional gallery. As a result of this exhibition Bill Freeman’s name has gone into the national records as a regional exhibition worthy of artistic statesmanship.  This also means that the particular paintings that were exhibited also gained considerable providence.”

In 2008 Bill Freeman was given and OAM for his services to art.  Bill set up the Society of Hunter Valley Artists, he was extremely generous to many causes in donating paintings to raise money over many years, and judged and mentored many art shows.  He continued to paint until his death in 2018.

In 1995 he started painting a special exhibition of buildings around Minmi.  These paintings were composed from sketches made as a youngster when Bill would roam the streets and lanes around Minmi recording the structures in his faithful sketch book.  No other person had records of the many buildings that once made up the busy mining town of Minmi.

The exhibition captured the thriving coal town at the turn of the 19th Century. One person acquired the entire works so Bill had to put together a second exhibition of the remaining structures that he had not had time to paint.  This was combined with the first group of paintings to make a show of paintings that depicted the entire town and thousands of ex Minmi people came to view this historic event.

In 1997, that exhibition, The Rise & Fall of Minmi was held at Morpeth Gallery, again depicting the history of the town of Minmi. The entire sixty‑three works in the collection sold within twenty minutes.

Bill preferred to paint in oils as he found this medium more challenging than watercolours. Throughout his career as an artist, he has painted just about every historic building in Minmi: the old houses, pubs and slab huts as well as some of the panoramic streetscapes of the old town.

Freeman’s legacy to Minmi Township hangs throughout the country in homes of the people who purchased a Freeman artwork ‑ a piece of the historic town of Minmi.