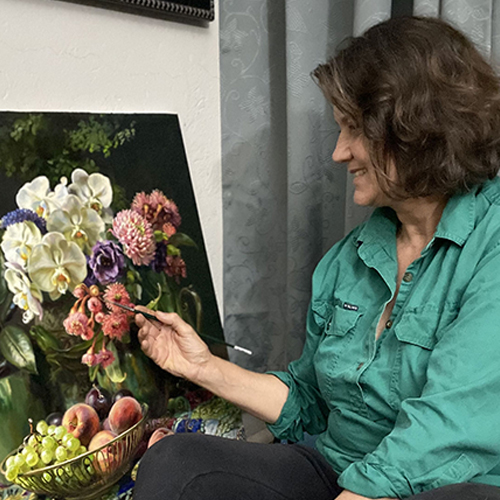 Oil on Board & Stretched Canvas

One of the finest realist oil painters of her generation.

This is still life at its best. Vases of lilacs, chrysanthemums, roses and mixed lilium, jump out of the frames to greet you. Antique vases, precious figurines & handcrafted bobbin lace are signatures in Ann’s paintings.  Ann has devoted her entire life to her art. She has been painting professionally since she was nine years old.

When viewing an Ann Morton painting one soon realizes that she has created a work of quality and exquisite beauty. Demand for Ann’s work is high.

During her childhood in NSW, she spent many hours painting from life, endeavouring to capture the colour and light that make a subject live. Although influenced and guided by several professional artists, Ann is mainly self-taught. By the age of 12 she was painting still life works for three galleries in Sydney, by 18 years of age she had won many awards for these art works.

Concentrating on still life since basing herself in the country NSW. Ann has had the distinction of being a finalist in the prestigious nationally recognized Archibald Portrait Prize. Public acclaim also resulted when her self-portrait was voted one of the top two in the ‘People’s Choice Award’. Further recognition came as a finalist in The Sporting Portrait 2000 (or ‘Sporting Archibald’), which saw her work exhibited in the NSW Art Gallery, the National Portrait Gallery in Canberra, and Regional Art Galleries throughout Australia.

Ann has refined a realist style through extensive study of the European Masters whilst travelling overseas. Unmistakably one of the finest realist oil painters of her generation, Ann’s outstanding skill in still life and portraiture reflect a noteworthy dedication to her art.

Not a prolific artist, Ann will spend weeks refining a painting ensuring that each new work attains the high standard set by her. Therefore, art collectors around the world are appreciating and acknowledging that an acquisition of her work is indeed an investment in excellence.

Ann Morton was born in 1958, and grew up in country New South Wales, Australia, where she commenced painting compulsively at the age of 9.

Encouraged by her artist/inventor father, an appreciation of the beauty and colours within the natural world around her began.

As a young girl she produced works far beyond her years, and so she started entering and winning adult art competitions. In her late teenage years, Ann left Australia and started her journey of discovery, travelling throughout Europe and North America.

During this tour she spent countless hours in Galleries and Museums studying the paintings of the old classical masters; such as Rubens & Rembrandt, closely observing and learning their use of light, texture and colour. Later Masters of the 19th & early 20th Century, such as JW Waterhouse, John Singer Sargent, and Sir Lawrence Alma-Tadema were also to have an impact.

Over the years Ann has continued to develop the skill and knowledge gained, being able to enjoy a highly successful full-time career. She has never received any formal training.

Throughout her career in Australia, Ann has won many awards for both portraiture and still life paintings. Her works are represented in private and corporate collections around the world.

She is a member of the Australian Portrait Artists Society, and was represented in an exhibition in Washington DC in 2005. In 2010 she was accepted by the Art Renewal Centre U.S.A. to be exhibited in the Foundation’s Living Masters Gallery. Also in 2010, Ann was invited by The Founder (Ed Copley) to join the American Society of Traditional Artists. The Art Renewal Centre has awarded Ann the title of Living Artist.

In Ann’s own words:

“To create paintings that can arrest you from across the room, but also give you the detail to sit and look into the painting, to meditate, feeling the textures, looking around behind the object (painting around the corners). Drawing attention to some areas and losing others in mystery.”

Ann says: “As I have worked and studied, I found two major threads to this magic. One was quite plainly the abstract patterns of light, colour and detail that delight the eye. The other was the actual content, the beautiful objects, flowers, plants and fruit that attracted me. All of which evoked emotions such as pleasure, nostalgia or just pure joy.

I found that this magic only happened when I was painting the things I truly loved. Thus I set out to gather these things around me… From fine china, French lace, antique silver, rosewood tables and ancient Indian wares to modern ceramics and colourful silk scarves. It is surprisingly difficult to find the things that really work, and I am continually using them in different combinations, using each as a phrase in my vocabulary of beauty. Integrating the old favourites, with new finds.”

Mostly influenced by the European School of Art, I love the juxtaposition of natural things with man-made objects. What is it that we put in the highest place of beauty in our homes? A bunch of flowers, and ragged looking ferns, the irregularity of pattern as opposed to the symmetrical and mechanical nature of our cultures finely crafted artefacts.

In an age of speed, I revel in the time I can put into my paintings. Time spent creating something that will delight a person enough for them to want to take it home. It is an art form that has grown from a slower age, but I feel that this makes it more valuable to us now.

In summary Ann says: “I could spend a great deal of time explaining the how and why of my work, however the important thing is that I really just try to create inspiringly beautiful paintings.”

Ann Morton has been a finalist in the following major Australian Portrait competitions:- The Archibald, The Sporting Archibald, and a number of times in the Doug Moran and the Portia Geach Portrait Prize. Internationally, in 2020 Art Renewal Centre awarded Ann a finalist in the still life category for two paintings in their 15th Annual Salon.