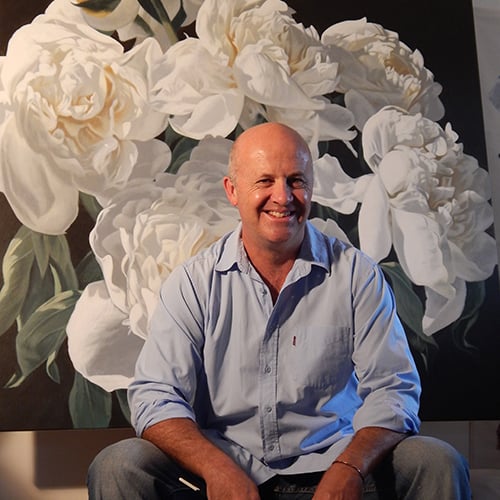 Oil and acrylic on Board & Canvas

Simon, a graphic artist before specializing in art, draws inspiration and material for his work from the natural world. An accomplished and respected illustrator in Africa, his paintings have developed to feature a diverse range of subjects from birds to flowers, in various media.

From fine studies of birds on paper to large botanical paintings on canvas,
Simon, now based in Sydney, Australia, paints magnificent lions, gorillas and other African animals and birds with accuracy.  His Australian red & yellow tailed black cockatoo portraits are equally engaging.

Simon also paints soft romantic flowers on large canvas. By large we mean the canvas can fill an entire wall in your home or a commercial building. He has contributed illustrations to four published books on African Birds.

Simon’s life as a professional artist began at the age of sixteen, when he sold a painting of a peregrine falcon to a school friend’s parents, while at boarding school in the Zimbabwean bush.  Inspired by an artist friend, their mutual hobby and a love of all things natural, bird painting soon occupied Simon more than school work.

After graduating from art school with a diploma in graphic design painting birds was preferable to working in the Cape, South Africa.  Simon promoted his artwork by holding solo exhibitions, which attracted commissions and established his career in the genre.  The highlight of that period was the publication of Gamebirds of Southern Africa, now in its second edition.

Simon paints floral landscapes, rather than compositions.  Using dramatic lighting and a large format – metres rather than centimetres, and inspired by artists like Caravaggio, his paintings “express the wonder these extensions of the planet kingdom hold for me.”

Simons floral, bird & animal life artworks are available ready to hang from at Morpeth Gallery.   Commissioned artworks for homes, offices and commercial buildings remain one of Simon’s specialities, no matter how small or large the space.